It's snowing in September and we're standing on genghis khan's horse!

We boarded the bus early morning to head out to the Ger camp in the Terelji National Park. Bogi forced us to play some group card games while on the bus, which would have been interesting except that half the group (again) didn't want to get involved. We then stopped at a supermarket to get some water and some gifts for the nomadic family which we would be visiting. It was a little difficult to work out what to get as there were too many people making decisions and thus we ended up buying way much more than we needed to.
The bus to the ger camp was an interesting experience, looking out at harsh endless rolling hills, passing shanty looking houses and driving on atrocious roads. It was one of the bumpiest rides ever, I swear I got airtime in my seat. Once we passed through into the national park, the roads stayed as atrocious but the landscape become stunning with mountains and rocks and lots of ger camps. We saw camels, eagles, yaks, cows and horses which got us all excited.
We dropped all our stuff off inside our Ger, I was sharing with Steve, Manu and Hannah this time and we were so excited to be sleeping in a proper nomadic tent, (with electricity of course!) It was very cosy, with 4 beds lining the outside and a fire place and table in the centre. We had little time to relax in the camp then it was lunch inside the dining hall. Every day the lunch and dinner menu changed and you got to pick what you wanted. It was pretty good food, with a dumplings, soups, salads, and big meaty mains.
After lunch it was free time so Roel, Steve, Chris, Renee and I decided to hike up the rocky mountain immediately behind our ger camp. Although it was steep, it was so much fun and the view from the top was unbelievable! It only took us 15 minutes to get up there (so as you can tell it was a HUGE mountain) and we sat up there for over half an hour sitting out on different rocky points. We had such amazing weather and had a gorgeous 360 view of this part of the national park, including the golf course.
We came down and I had a delightful little nana nap before we went into the dining hall to try on the traditional mongolian clothes. The costumes are quite elaborate and very warm. We took many silly pictures looking out over the national park, which when looking back at them feels like we were infront of a blue screen. It was very surreal!
We then boarded the bus and headed a few kilometres down the atrocious roads to the traditional nomadic family. The grandmother of the family welcomed us into her ger and offered us traditional Mongolian snacks of dried curds, cheeses, little breads and cows milk. It was fascinating learning about the nomadic lifestyle through Bogi. This family moves twice a year, for winter and then summer and life is based around getting milk from the cows, preparing food, keeping the area and yurt clean and sewing clothes. What we didn't expect and was a silly assumption by us, but they were connected to the grid, with fridges and a TV inside the yurt. The woman then offered us a glass of fermented mare's milk. This alcoholic horse milk was incredibly sour and smelled potent. Not a drink I will have again. We then went out into her field of cows to watch her milk the cows for a little while before it was seriously too cold for us westerners to stay outside.
When we came back the women running the camp came around and got the ger tent fires going, it was delightful but they dumped a whole bag of coal, including the plastic bag into the fire which we were not impressed about. It's these moments that makes you realise the difference between the developed and developing nations. We had a nice dinner together again and then a bunch of us played poker into the night.

Our second day at the ger camp, we got to have a lovely big breakfast in the dining room before heading some of us headed out on a hike up one of the other hills. The hill was very deceptive, looking like you could just stroll up the green but instead was a leg burning climb! Once again we climbed all the way up to the top and hung out on the rocks with 360 degree views all around! It was so peaceful and gorgeous up there.
While coming down the hill the boys playing a game of bottle golf and then we headed over to do some archery. It was quiet a distance and only one person was able to hit the target and consequently broke the quiver. It was lots of fun though!

We had another large delicious lunch in the dining room before heading out on the main activity we did here - horse riding. Emma unfortunely was allergic to horses (as well as eggs, nuts and other animals!) and Hannah was sick but the rest of us headed out on our group of small horses. We were a formidable bunch. Unlike Steve, I wasn't nervous about riding but I am totally happy to admit I have no idea what I am doing on a horse and so felt like quite a fool for a while. We walked the horses 1hr to the famous turtle rock, a rock formation that surprise surprise looks like a turtle. On the way my horse, who I named Blacky, decided he didn't want to play anymore and just stopped and so I chose to get the upgrade package of being led by the guides to the rock. I was freezing so was quite glad to be able to put my hands in my pockets.
At the turtle rock we climbed upto the turtle neck to see the view. The rock was in a different part of the park so it was a completely new view for us. A few of us slipped through a little crevice to be able to sit out on the other side too. When we came back to the other side it was starting to snow! This was pretty amazing, we were in mongolia in september, riding horses and climbing on sacred rocks and it was snowing!
The ride back to the camp only took me 20 minutes as I got my confidence and went off with the guide trotting and galloping the whole way back. It was pretty amazing and fairly surreal for me. I really enjoyed the galloping but when I got off I still had no desire to get back on a horse anytime soon. The whole horse riding was an absolutely amazing experience!
When we came back we chilled out for a little while, getting the fire in our tent going and realising we had no electricity. We had dinner in the dining room in candlelight and i-phone flashlights as the whole area was in a blackout. It was quite nice but slowed down the dinner process substantially. Once again the same bunch of us hung around playing card games and the boys anamitely discussing the topic of infinity.
We left quiet early the next morning after breakfast and as we were driving out it started to snow, the whole drive out of the national park and to our next sight was in the midst of a proper snow storm. It was absolutely amazing and our driver did an amazing job of dealing with the snow as well as the terrible roads. We drove to the largest man on a horse statue in the world. In the midst of nowhere was an enormous new stainless steel statue of Genghis Khan on a horse. It was so strange. It was still snowing and as we walked up the stairs to go inside some people, including Steve who was experiencing his first time in snow were throwing snowballs. Inside was a great little museum about Mongolia during the bronze age and the history of Mongolia. It was wonderful collection of weapons, armour, ornaments and jewellery. We then got to climb up the inside of the horses leg and stand outside on top of the horse's head in the snow, staring back up at the giant face of Genghis Khan!

We took some nice group photos and then headed back for 2 hours on horrendous roads again, watching the snow disappear and slowly we came back into the hussle of UB. After we checked back into the hostel most of us headed out to an all you can eat mongolian barbeque restaurant. We got to select all the veggies, meat and sauces and then the guy cooked it on a giant round hotplate and performed tricks to put the cooked food on the plate. It was fantastic and we all stuffed ourselves silly so we wouldn't need to eat dinner! Emma was the little powerhouse putting away a higher food to weight ratio than anyone else! She is full of surprises.
After we were completely stuffed Bogi left us and we went souviner shopping and bought food for the train ride before going and chilling out for a little in the hotel. For once I think I was quiet restained as the idea of eating anything else was horrid!
At 7:30 Roel, Hannah, Emma, Steve and I met Bogi and she took us to a karoke pub. We were in a pimped out private room and for 2 hours we massacred many classics and a few mongolian songs too! Afterwards Roel, Emma, Steve and I headed out to go clubbing in UB. We first of all got taken by taxi to a club that wasn't even open and so had to get another taxi to another club which turned out to be fantastic. We spent the next few hours, into the early hours non-stop dancing! The fanscinating thing is that if we didn't remind ourselves that we were in UB, or notice all the mongolian's around us, we could of been in any nightclub in the world. The only main difference was that after 12 a couple of times the music stopped for 10/15 minutes. After 12 they are legally not allowed to play music but to keep it going the police need to be paid off. This happens pretty much everyday at every nightclub! We had to drag Emma out of the club while the rest of us were shattered and we headed home for 2 hours of sleep before our early morning start the next morning. 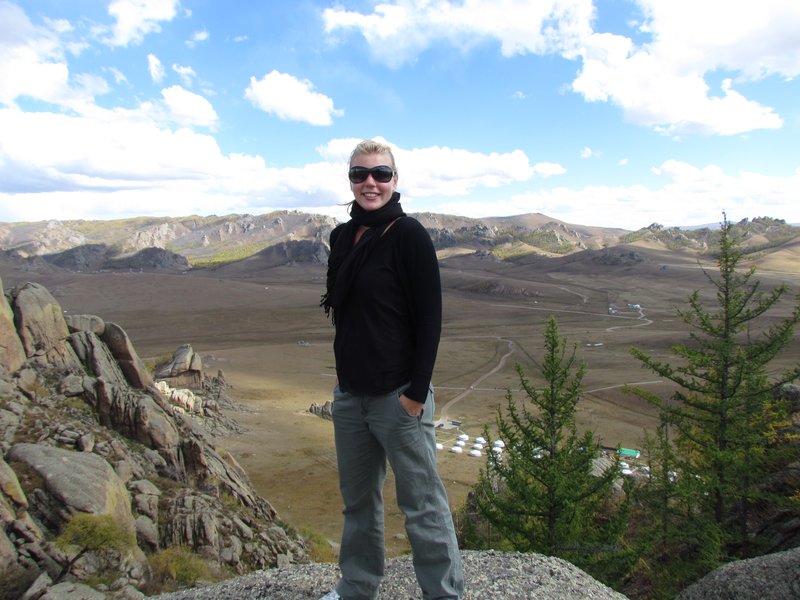 Climbing the hills around the ger camp 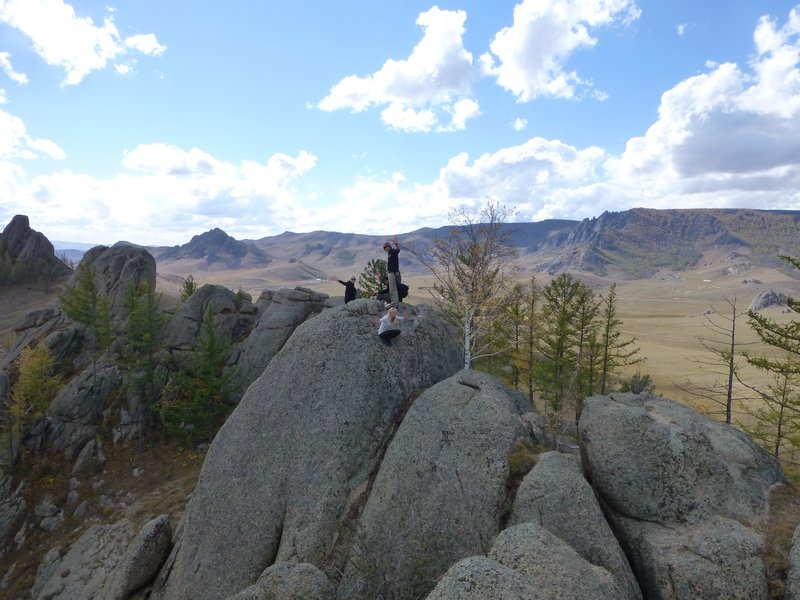 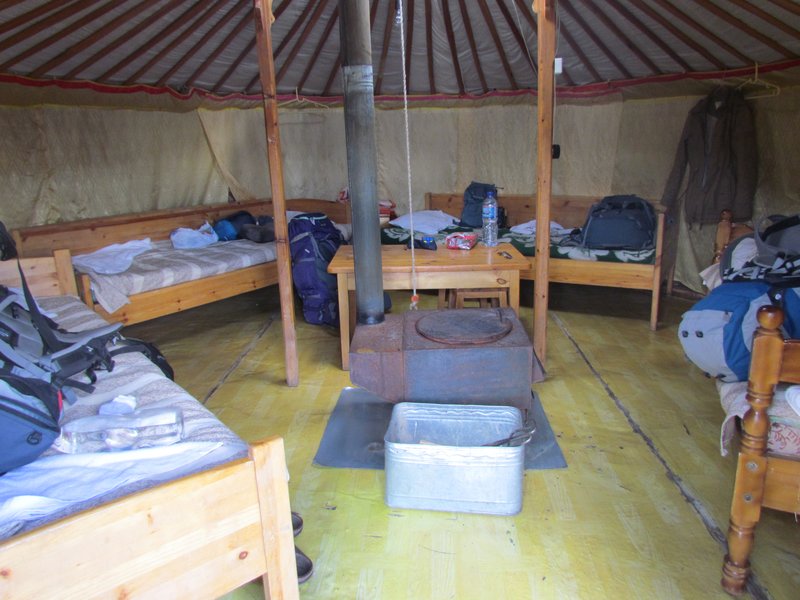 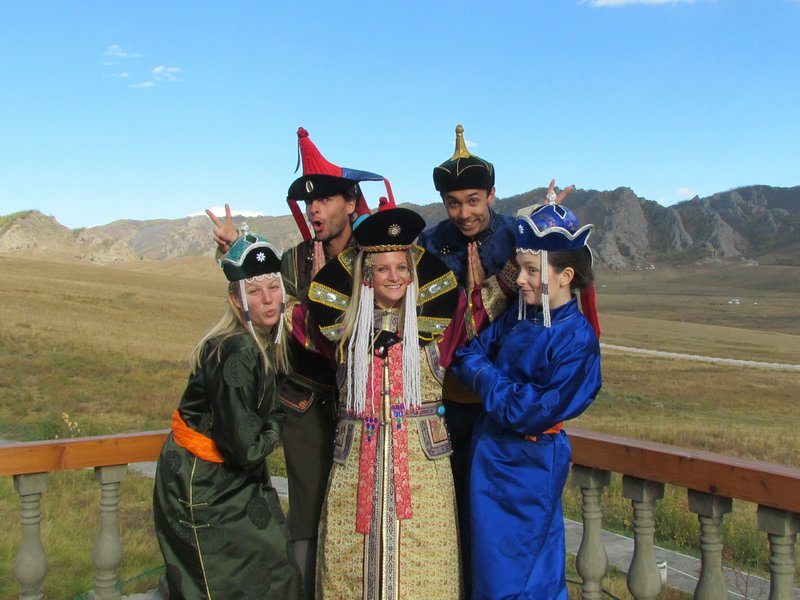 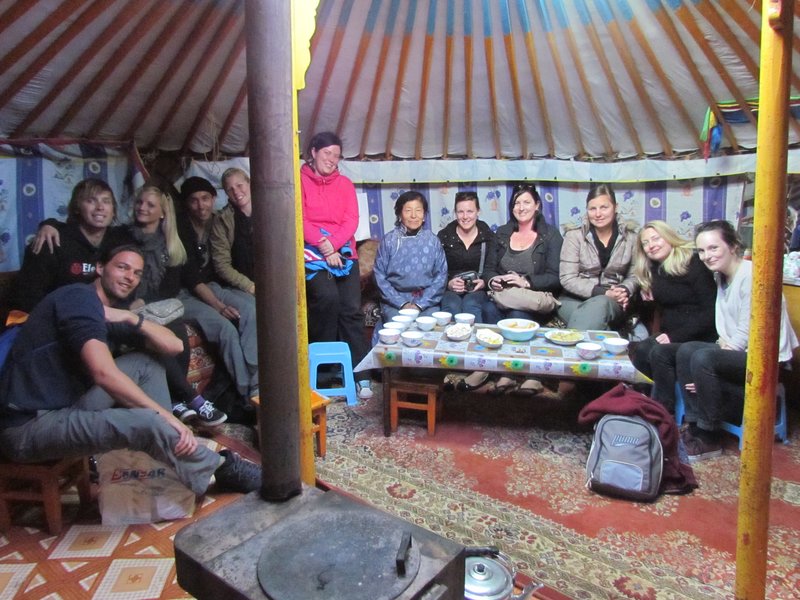 In the nomadic family tent 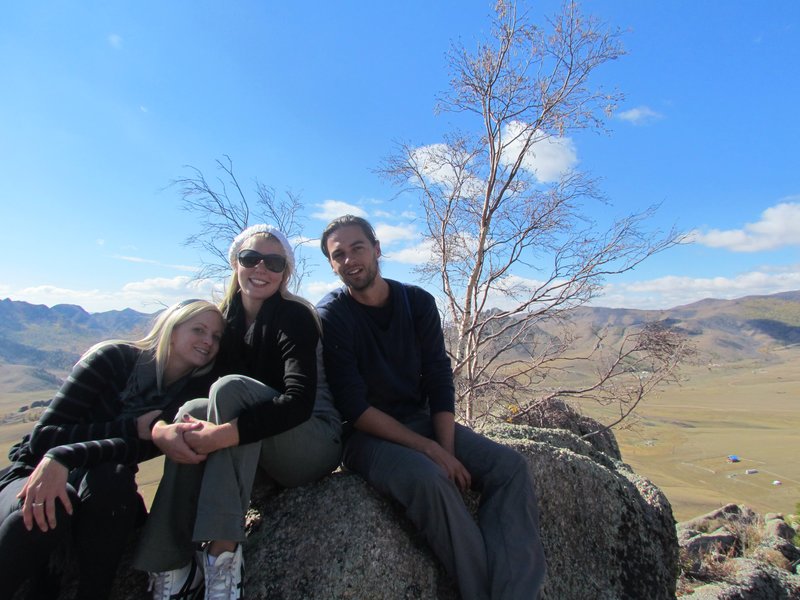 Renee, Roel and I at the top of the mountain 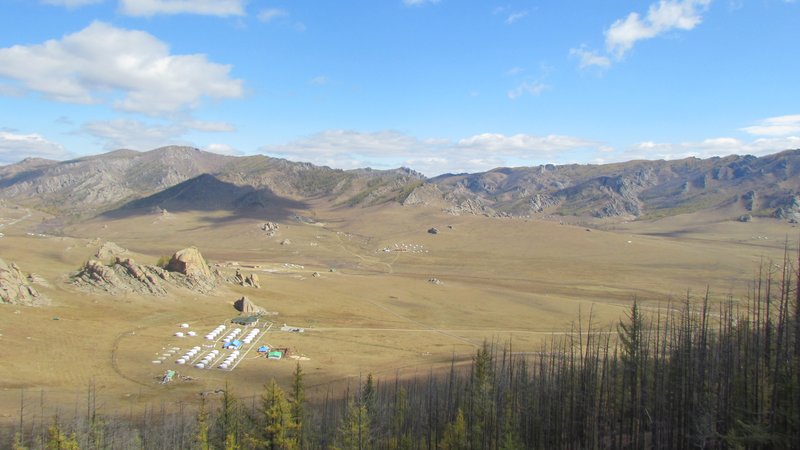 The view from the mountain 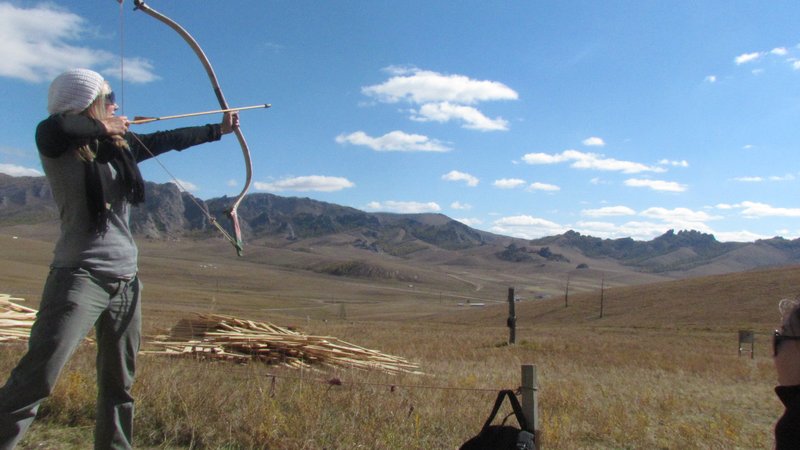 Archery at the camp 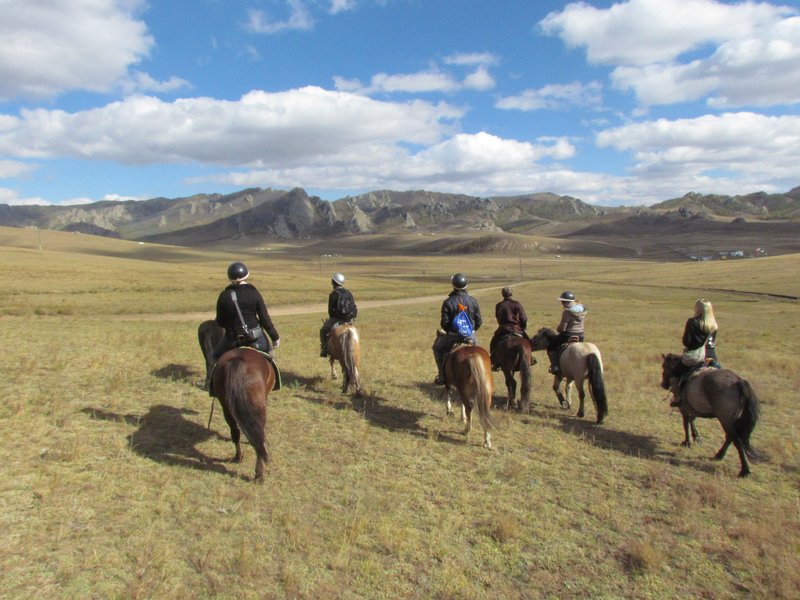 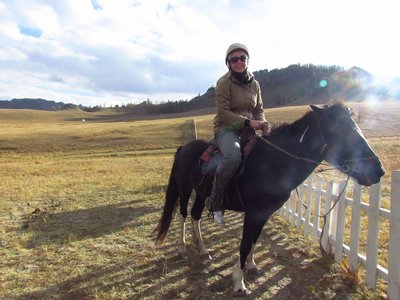 Look at my horse, my horse is amazing 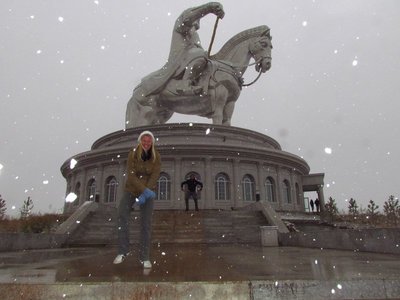 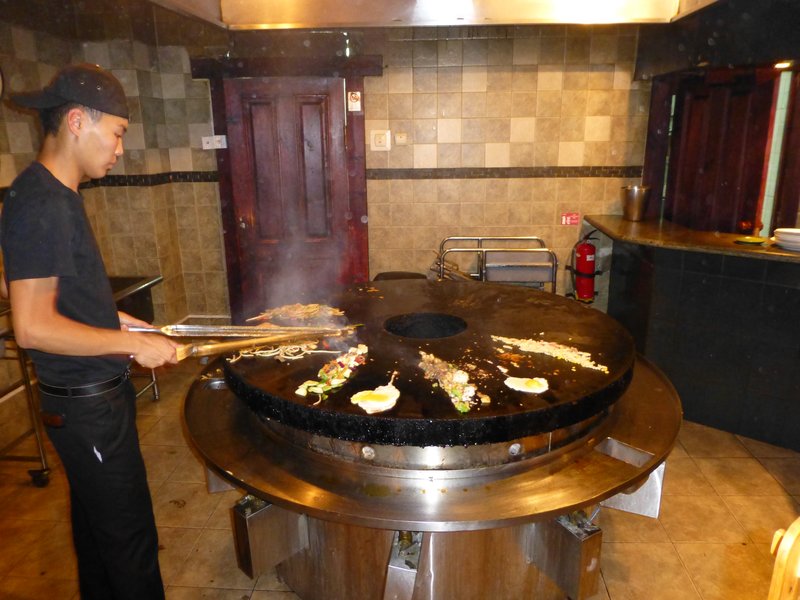 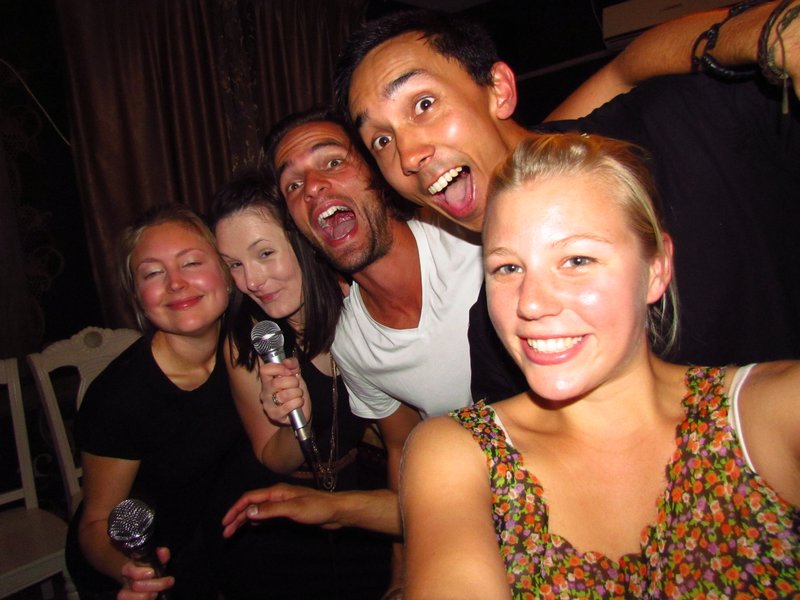