The train to Mongolia

We hung around the hostel in the morning, packing, having yet another strange breakfast and going down to the see if we wanted anymore silly souviners from the town. Then it was the hour bus back to Irkutsk, stopping on the way to get some more food for the train.

In Irkutsk Artur took us possible one of the worst tourist walks ever, we saw a statue of an old tsar, then walked along the river through a rundown amusement park and looked at an old steam train then walked for an hour through the town, seeing absolutely nothing interesting but run-down buildings and parks, progressively getting more and more annoyed and grumpy as we wanted to eat and we had not choice in what we saw or did. Boring! We had a ridiculously late lunch at a crappy food court before making our way through down town Irkutsk to some old soviet tanks. This was possibly the only interesting thing of the day, being able to climb all over tanks, rocket launching trucks and an anti-missile warhead launcher. Many photos later we walked back through the town to the ubiquituous Irish pub and had our last drink in Russia - a Irish beer. jeez.
We walked another 10 minutes to a little dissappointing restaurant and I had a crappy meal of vareniky and then we all finally got back on bus and made our way to the train station.

We were so excited when we got on the train and it seemed so much more comfortable and nice than the last one, with windows that actually open and babushka's that seemed helpful! Steve, Hannah and I ended up sharing with Anna-Rose, a dutch solo traveller also making her to Ulaan Baator. With happy faces we all got settled in and set off on the 2 night train to Ulaan Baator. Our carriage seemed to be compiled entirely of tourists doing identical tours of the the trans-mongolian. We did our exercise routine again and then settled in to watch Anchorman for our night movie session!

Day 2 and I was the first to wake in my carriage, so with minimal noise I got out and watched the scenery from the corridor. It was so much more like I imagined Siberia to be, but actually we were leaving Siberia for the plains of Mongolia. It was plains of dry grass with desolete looking towns and hills and mountains in the distance. Slowly everyone along the train woke up and all have shared the same statements about the landscape. We had breakfast and hung out, getting off at some pretty dead towns for the mandatory stops.

I made a fortunate decision of having lunch early as at some time in the early afternoon we arrived at the border town. We were stuck here for over 5 hours and once again it was a town filled with dead despair, there was pretty much nothing. After hanging for a little bit, Emma, Roel, Steve and I headed through the town and climbed a sandy hill, which was much harder than it looked and got a view over the town and the hills around. Afterwards we layed in down on the station for what felt like an eternity and the boys entertained themselves with silly i-phone games. During our hill climb the train had moved tracks and had no engine and was hiding behind another train but a few of us snuck around and sat in the cabin for the last 30 minutes and were able to eat again. The russian officals then came on and collected everyones passports, another slow process and they also came in and checked our luggage quickly which meant that Hannah and I on the top bunks had to pull it down from the top shelf. We got our passports back with a big shiny stamp on our visas and eventually moved the 10 minutes over the border, past the marker post with a russian flag on one side and a mongolian on the other. It was an incredible thought that I was actually now in Mongolia. It looked pretty much identical to the Russia we'd just been in, and was really beautiful watching the sunset as we travelled! We were then stuck at the Mongolian border town for another 2 hours, here we got some Mongolian currency, which cannot be exchanged outside of Mongolia and then we hung around on the train. The Mongolian border control seemed tougher, there were more people coming through the carriage and the passport inspection seemed a little more rigorous, with Steve in particular getting looked over quite a bit. But eventually we were on our way towards Ulaan Baatar. We did our exercises again and then for me it was time to sleep as we had a really early start the next day. 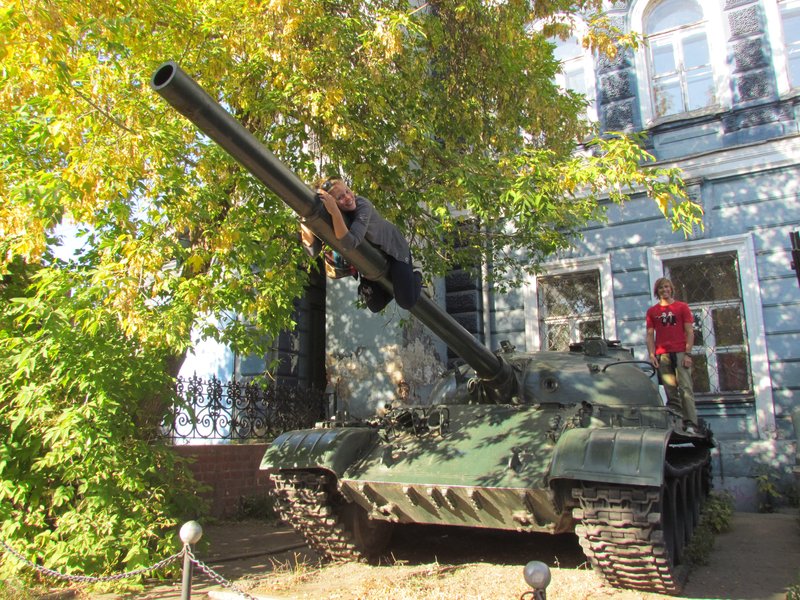 Climbing on a soviet tank 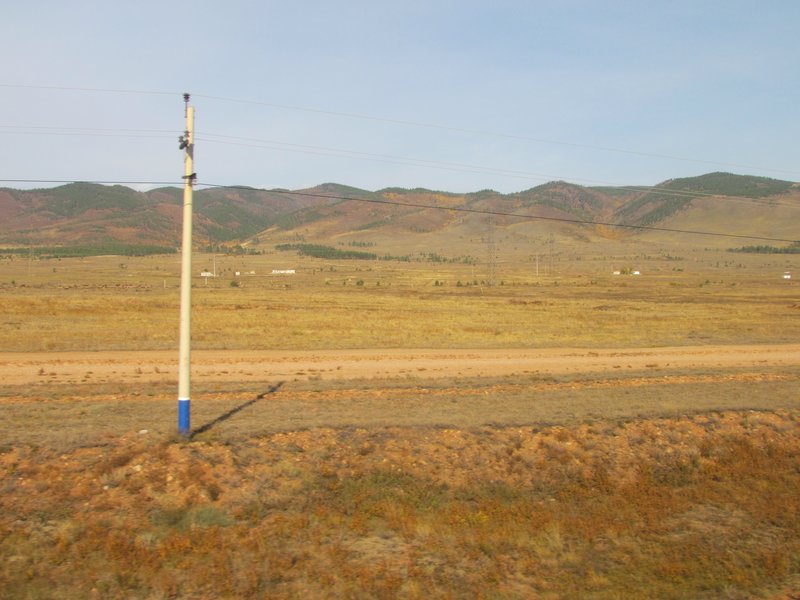 Siberia on the way to Mongolia 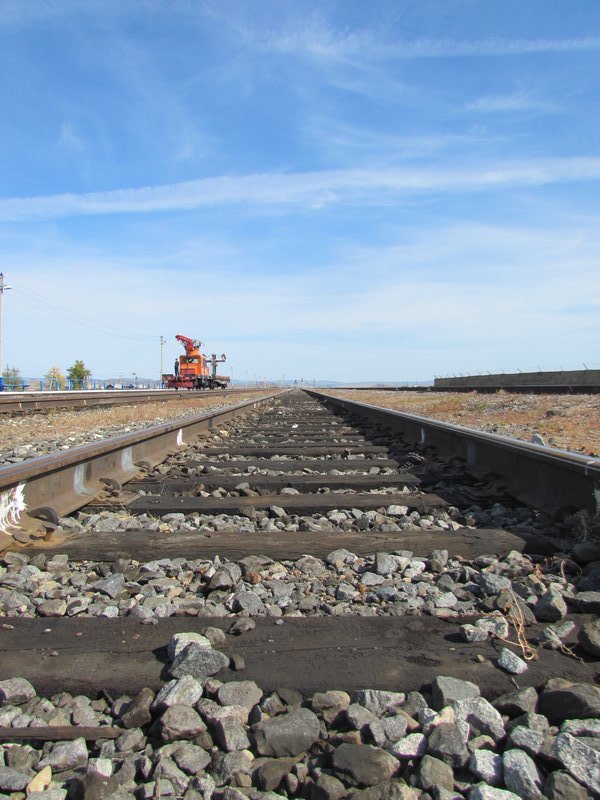 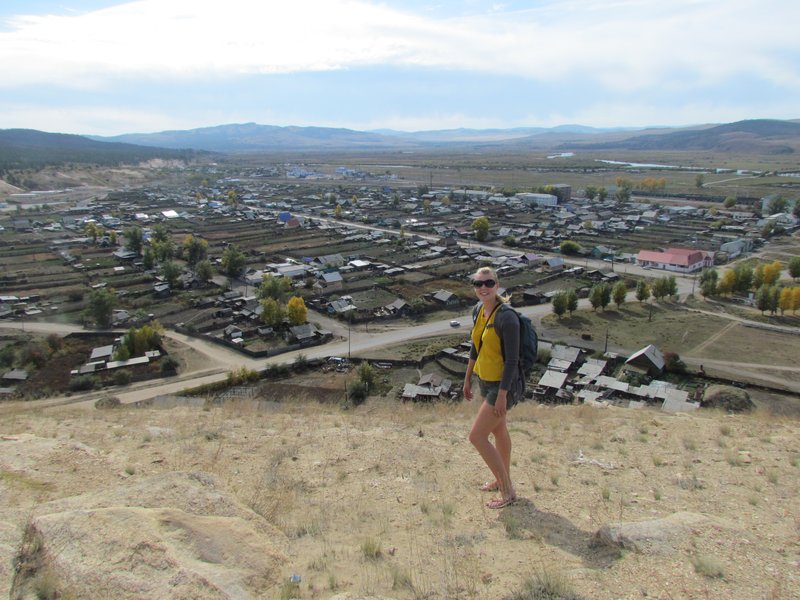 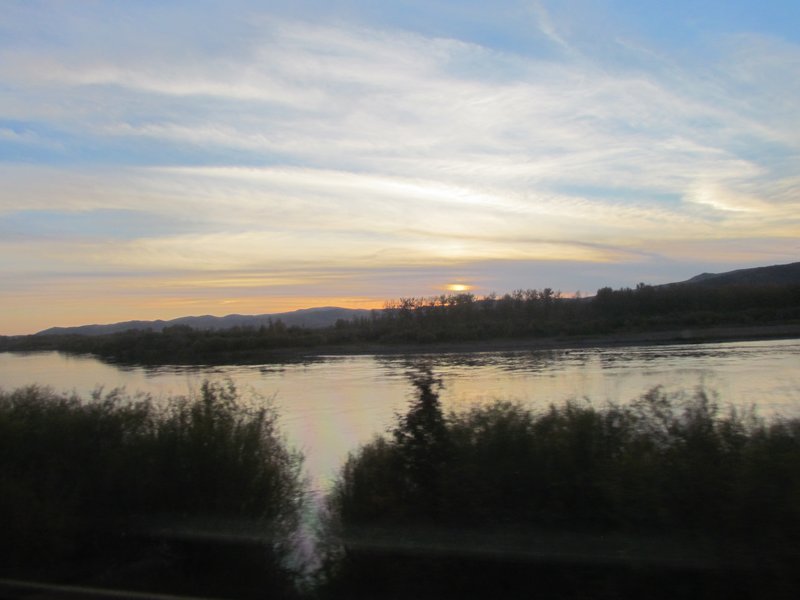 View from the train: Sunsetting over Mongolian plains